About life and creativity

Stravinsky Igor Fyodorovich was born on June 17 (June 5), 1882 in Oranienbaum (now Lomonosov in the Petrodvorets district of St. Petersburg) in a family of opera singer and pianist. His family came from Polish landowners and had a surname – Soulima-Stravinsky. The Ukrainian roots of Stravinsky have been repeatedly mentioned. The well-known conductor Igor Blazhkov, who knew the composer personally, found in the archival documents of the Stravinsky family that the composer’s ancestor of 1597 was a vogt of Kiev.

The premiere in Paris took place in 1910 and stars Karsavina, Fokin and Stravinsky were called to the stage many times. This evening Sergei Diaghilev introduced Stravinsky to Claude Debussy.

This was the beginning of glory, and this stage of Stravinsky’s work is called by musicologists – the «Russian» period (1908 – 1920’s). Stravinsky’s aesthetics are formed, connected with the «theater of imagination», and the main elements of musical language: «pospivkovyi» thematicism, free metrorhythm, ostinati, variative development.

I. Stravinsky with S. Diaghilev

And further – Stravinsky’s ballets become an integral part of Diaghilev’s «Russian Seasons» in Paris. Soon viewers saw the famous Vaslav Nijinsky starring Petrushka in the unmatched sceneries of Alexandre Benois. Premiere of the ballet «Petrushka» took place on 13 July 1911 at the Theater Chatelet.

At age 9 Igor had already played the piano. But the path to music was not very fast. Stravinsky studied at the Law Faculty of St. Petersburg University, but did not pass the exams, he simply received a certificate of the listened courses. Further – he for 5 years studied composition with Nikolai Rimsky-Korsakov.

At this time Igor Stravinsky gets closer with the impresario Sergei Diaghilev. Sergei Diaghilev and Mikhail Fokin admitted that the «Russian seasons» in Paris, which have already gained much popularity, lack ballet on the subject of Russian fairytale. Together with the collective, namely: with ballet master Mikhail Fokin, artists Alexandre Benois and Alexander Golovin Diaghilev writes a libretto about the Firebird. Immediately upon completion, they order the music from Anatoly Lyadov, professor at the St. Petersburg Conservatory. However, music writing has taken a long time. Meanwhile, Diaghilev gets acquainted with Igor Stravinsky. It was then that Stravinsky’s first piano music was born, in which musicologists trace the influence of the Impressionists and the Rimsky-Korsakov School. And after hearing the orchestra play «Fireworks» Diaghilev orders Stravinsky music for the libretto «Firebird». The music is written and rather difficult rehearsals began. The main roles perform stars: Firebird – Tamara Karsavina, Prince – Mikhail Fokin. The troupe once said that there was «no melody for dance» in the music. However, Stravinsky continued to set his own rhythm at rehearsals, sing along and «detune the grand piano».

photo from the ballet “Firebird”

«When I was composing this music before my eyes I had an image of a toy dancer who suddenly broke off the chain, who, with his cascades of devilish arpeggios, takes the orchestra out of patience, which in turn responds to him with threatening fanfare. A fight ensues, which eventually ends with the dancer’s lengthy complaint about exhaustion from fatigue. After completing this strange passage, I spent hours walking along the shore of Leman Lake, trying to find a name that would reveal in one word the character of my music and therefore of my character. And once I suddenly jumped with joy: “Petrushka”! The eternal and unhappy hero of all fairs, of all countries! That was exactly what I needed – I found his name, found the title!»

Success of the ballet «The Rite of Spring» (1912-1913) fixed the importance of Stravinsky in world music. It premiered on May 29, 1913 at the Champs Elysees Theater in Paris. The author of the sets and costumes was Nicholas Roerich, choreographer – Vaslav Nijinsky, conducted by Pierre Monte, impresario – Sergey Diaghilev.
It was very bold to bring pagan rite in the center of the ballet. 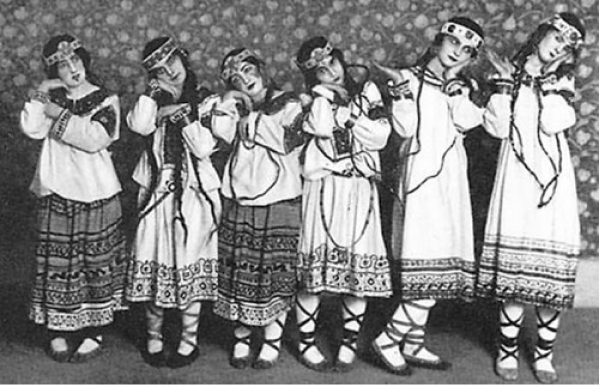 photo from «The Rite of Spring»

As for the premiere of «The Rite of Spring» Stravinsky mentioned:

I will refrain from describing the scandal that it caused. He was talked about too much <...> I did not have an opportunity to judge the implementation during the performance, as I left the hall after the first bars of the introduction, which immediately caused laughter and abuse. <...> The exclamations, at first single, then merged into a general hum. Discordant with them protested and very soon the noise became such that it was impossible to make out nothing <...> I had to hold Nijinsky’s dress; he was so angry that was ready to rush to the stage and make a scandal …

However, it should be remembered that the creativity occurred in parallel with the composer’s private life. Every summer from 1907 to 1914, while writing the aforementioned works, Igor came to his parents to Volyn in the town of Ustyluh. Here he met his first love – Katerina Nossenko from Kyiv, who became the mother of four children of the composer, among whom artist Fyodor Stravinsky (1907-1989) and composer and pianist Sviatoslav Soulima-Stravinsky (1910—1994).

In 1914 Stravinsky came to Ustyluh for the last time to collect materials for writing his next work «The Wedding». In Switzerland he was caught by the First World War and since then he has lived between France and Switzerland, in 1934 he obtained French citizenship.
Changes befell also his work – «Pulcinella», a ballet with singing (1919-1920), which marks the beginning of a new stage, commonly called «neoclassical» (until the 1950’s). The period is quite prolific, Stravinsky writes about 45 works.

By the end of the 1920s, Stravinsky created works such as: «Apollo», «Fairy tale about a fox, a rooster, a cat and a ram», opera-oratorio «King Oedipus». His customer was Music Department of the Library of Congress, and the work was paid for by patrons. Collaboration with Sergey Diaghilev finally finished in 1928.
It was an interesting work with the rich and famous ballet dancer Ida Rubinstein at that time who commissioned the choreography for the ballet «The Fairy’s Kiss» by Bronislava Nijinska, the scenery by Alexandre Benois and the music by Igor Stravinsky.

Libretto based on the fairy tale by H.K. Andersen’s “The Ice Maiden” was written by Stravinsky together with Benois. The composer used pieces of Tchaikovsky’s music in ballet «Lullaby in the storm», piano plays «Humoresque», «Natha-Valse», «The Harmonica Player», «Feuillet d’album».
The premiere of «The Fairy’s Kiss» took place in Paris on November 27, 1928.
During this period, he turned to various stylistic models, mastered the techniques and means of European Baroque music, the technique of ancient polyphonic art, and also wrote vivid original works based on various historical and stylistic models.

I. Stravinsky with Vera Boss

On this Stravinsky’s creativity is significantly transformed and going through a so-called «crisis». And in the family life of the composer is not an easy period. His first marriage ended tragically. In 1938, eldest daughter Ludmila dies from tuberculosis, and after her, in 1939, his wife Katerina dies from the same disease. Stravinsky also farewells with his mother Anna Kirillovna and is very ill with tuberculosis.

Friendly environment helps – communication with Pablo Picasso and Charlie Chaplin, talking about personal relations with Coco Chanel. Already in 1940, he married for the second time with Vera Sudeikina (Vera de Bosset), an actress of silent movies. Together they have lived for over 30 years. Even before, Stravinsky frequently visited the USA, but already at this time finally decides to move and in 1945 received US citizenship.

Having exhausted the themes of the Russian fairy tale and pagan rites, the composer goes on to the last period of creativity, which was dubbed «serial» or late period (1950’s). Here he mostly addresses religious topics. Of the works worth mentioning are Septet (1953), «Threni» (Lamentations of the Prophet Jeremiah, 1958), «Movements» for piano and orchestra (1959) and «Variations in Memory of Aldous Huxley for Orchestra» (1963/1964). Stravinsky strengthens the role of vocal words, freely uses dodecaphonic techniques (within the framework of Stravinsky’s tonal thinking). He was one of the first to discover new musical and structural elements in folklore, to assimilate some modern intonations (such as jazz), to innovate in metro-rhythmic organization, orchestration, interpretation of genres.

In 1962 Stravinsky came to the Soviet Union, visited Moscow and St. Petersburg (then – Leningrad), but he never again came to his house in Ustyluh.

Stravinsky considered to be the final piece of his career «Requiem Canticles», written in 1966. The composer died on April 6, 1971 in the United States, buried in Venice at San Michele Cemetery.

Time does not pass,